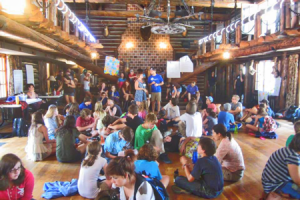 Last week I was the only adult of color on a 16+ person staff for QUUest church camp in CO. There were 14 youth of color at high school camp.

Being the only staff Person Of Color (POC) during this week of violence, protest, and grief was the toughest challenge of my professional life.

I’ll say this: The choice between white fragility and solidarity really matters.

We had 14 young people of color who were terrified that they or family members or friends might be the next hashtag, and we had folks who seemed more concerned about the camp schedule/their idea of what camp ought to be.

The POC high schoolers spent a lot of time in POC-only space last week. It was hard and healing.

At first the group feared gathering. It’s unusual for them to be around other POC, and they worried about dividing the camp. Quickly they saw that it was most important for them to *take care of themselves* and be in community. They ate, laughed, grieved and sang–together.

They got close not just through mourning Philando Castile and Alton Sterling and the officers in Dallas, but through seeing that they are not alone. It was life-changing, life-affirming space. They found and made home.

I was the lone adult POC supporting them. Luckily several of our white adult/youth staff members helped. Predictably, that wasn’t true of everyone.

As the schedule kept changing, as tragedy and need to process kept “getting in the way,” though several were supportive and helped the schedule shift, some folks expressed frustration–with me, with the prospect of losing camp traditions, with the POC-only space, and more.

I badly want white UUs and other progressive folks to know and see that carrying out white supremacy isn’t always obvious. It can look like never asking “How can I help?” or “How are you holding up?” It can be never asking “I wonder how this black person is handling two black persons’ murders.”

It looks like responding to a white person’s statement of “next year Kenny can’t be the only POC on staff” with “beware of affirmative action,” like there aren’t fifty other wonderful religious professionals/young adults of color we couldn’t pay and have join us.

If you take nothing else from this status, take this:

I’ve attended camp since I was four. It means eeeeeverything to me. We can get stuck on whether to sing Rocky Raccoon or I Wanna Linger at Bridging, or whether it’s Good Friends or Dear Friends (it’s obviously Good Friends ‪#‎SWD4lyfe) or whether moving talent show/coffeehouse back a night messes up the flow of camp, or who knows what else. I say this as someone who *loves* traditions.

Camp, and church, and faith, are about showing up for people when they need us. It’s about finding compassion even through our frustration. It’s about loving hard and saying “how can I help?” It’s about letting people cry and weep and holding them as they do.

I barely made it through this week, friends.

I called and texted UU adult POC like Elizabeth Nguyen (UUA’s Leadership Development Associate for Youth and Young Adults of Color) and Jamil Scott (Director of Religious Education serving First Unitarian Society of Denver) in tears over and over because I didn’t think I could be what the youth of color needed and because the killings brought such grief.

Alicia Forde (UUA’s Professional Development Director) drove two hours on one night’s notice to spend Friday with us so I wouldn’t be alone and so the youth could be with a minister who shared their experience.

If we’re not doing that for each other–supporting others when we’re less directly affected, and sitting together in hard times, and driving or moving to be there for each other–then I have to ask: what’s the rest of it even for?

To my UU and human families: I love you. To my POC UU fam: as we’ve said and sung to/with each other so many times this summer, I need you to survive.

Kenny Wiley is a UU World senior editor and director of faith formation at Prairie Unitarian Universalist Church in Parker, Colorado. His writing has also appeared in the Boston Globe, the Houston Chronicle, and Skyd Magazine.