When I ran into Tandi Rogers this week, it was with utmost sincerity that I passed along my condolences for her Seattle Seahawks losing the big game. Any lifelong Patriots fan, in all seriousness, had a great deal of empathy for Seattle: we know what it’s like to be let down by Pete Carroll, the current Seahawks head coach. Carroll was the New England Patriots head coach from 1997-1999, before leaving to successfully coach college football at USC, and eventually make his way back to the pros, and the Super Bowl, with Seattle.

Both coaches in this year’s Super Bowl struggled in their first head coaching gigs. In fact, since 2000, only 6 of 16 Super Bowls have been won by teams with a first-time head coach. Being ecclesiology geeks, Tandi and I immediately wondered what this means for the culture of our congregations. How should this inform the cultures of our congregations? How should it inform our approach to figuring out what works and doesn’t in this time of rapid transformation in our faith communities?

After Carroll and Patriots head coach Bill Belichick suffered ignominious stints in their head coaching roles in the 1990s, they followed similar paths. Each then took a demoted position (Carroll as a college coach, Belichick as an assistant), overcame their fatal flaws (Carroll being too much of a “player’s coach”, Belichick being brusque to the point of inefficacy), and led teams to Super Bowl victories in their subsequent positions. Those in-between times were crucial: Carroll and Belichick didn’t quit coaching, but neither did they keep doing the same thing as before. I have been involved with Unitarian Universalist youth groups since Carroll left the Patriots, and immediately recognized this pattern as one that I am familiar with: in each of the three youth groups I have led as a youth or staff member, we have seen a need for change, fixed what was flawed, and come back stronger than before. The innovations have included routine walks to the local coffee shop during youth group, collaborating with a neighboring congregation, and pairing youth and adult facilitators, but there are many variations that would have met our needs. I would encourage folks to brainstorm liberally if you are contemplating a change to your congregation’s youth group format, or to any other congregational program.

There comes a time with some NFL head coaches when their fan bases are so frustrated they begin rooting for the team to lose, just so it will get rid of him. Patriots fans were there with Carroll in 1998. I think we can get to that point with programs sometimes in our congregations, where we begin hoping they will fail because we are tired of putting emotional and physical energy into them. Sometimes that means we are ready to let them not happen, sometimes it means we need to shrink or radically rethink their roles in our congregation. But to the extent that we can be Carrolls and Belichicks about them, to the extent that we can learn from our failures, retool in ways that allow us to work on on our flaws, and reemerge better than ever, we will be successful in creating invigorating and inspiring programs. Even in the high-pressure, outcome-oriented, zero-sum world of the NFL people can “experilearn”; the sky’s the limit when we do it in our collaborative, process-oriented, value-adding communities of faith!

In the meantime, don’t forget to check your air pressure 🙂 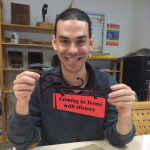 Rev. Jonathan Rogers currently serves the Unitarian Universalist Congregation of Atlanta as Youth Programs Coordinator and is Co-Facilitator for the Young Adults @ General Assembly group. He loves playing the Rubber Chicken Toss with his staff team, but he would still have them run the chicken on second down at the goal line.

Note from Tandi:  I promise no more football blog posts until next year.  Baseball season is coming up quickly!