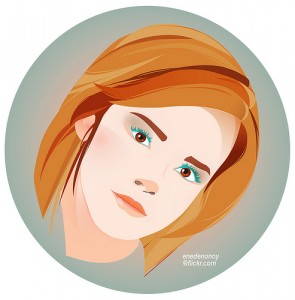 We love our Famous Unitarian Universalist Lists, don’t we?  Alcott, Dickens, Potter, Revere all have United States postage stamps, and that can feel like a stamp of approval.

Stefan Jonasson says on his personal blog: “Emma Watson set Unitarian Universalist hearts aflutter with hope and speculation (a couple months ago) when she came out as a Universalist, leaving people to wonder whether she had been quietly lingering in one of our congregations. Goodness knows, we like to imprint the names of famous Unitarian Universalists on our t-shirts — perhaps even tattoo them on our torsos, if we’re into that sort of thing — so I braced myself for a new wave of name-dropping and celebrity admiration in our congregations.
“Now perhaps you’ve been living in a bubble on the edge of the known universe and have no idea who I’m talking about. Emma Watson is the gifted young actress who came to fame as the character Hermione Granger in the Harry Potter movies. As Hermione, she was the smartest character in both the books and the movies who wasn’t actually on the faculty of Hogwarts Academy — and she seems equally intelligent, thoughtful and charming in real life.
“Interviewed before the release of the movie Noah, in which she portrays Noah’s adopted daughter, Emma Watson said, “I already, before I did the movie, had a sense that I was someone that was more spiritual, than specifically religious.” She then continued, “I had a sense that I believed in a higher power, but that I was more of a Universalist, I see that there are these unifying tenets between so many religions.
“Well, as it happens, these sentiments are commonly found in Unitarian Universalist congregations — and the sense that there are values that cross the traditional boundaries of religion, values that we might call universals, is strong among us. So strong, in fact, that many people today mistakenly imagine that that was what Universalism was always about. But as it turns out, that notion of universalism is a later development that emerged as an earlier understanding of Universalism — one that was concerned with the Christian doctrine of salvation, but little concerned with other religions at all — grew and prospered and, for all intents and purposes, won the argument … and therefore came to dominate most of the mainline and liberal churches, whether they called themselves Universalist or not. If you want to find an old-line Universalist today, you’re more likely to come across them in the United Church of Canada or an Anglican parish — or even a Lutheran congregation. But there was a day when an accusation of Universalism could have caused a scandal in any of these churches.”

So what if we claimed Emma as a sibling in faith?   This was discussed at some length on some of the UU Facebook laboratory groups like the UU Social Media Lab, UU Bloggers Workshop, and UU Growth Lab.  Many felt that the approach to claiming someone as Unitarian Universalist when they public espouse universalist spirituality or identify as universalist is a misappropriation. It is a violation of religious freedom, a violation of the claimed individual’s religious freedom to do so. One lab member said, “It is worse than offensive to say that someone was a UU but didn’t know it.”

What is that urge to claim about? Another lab member said, “I think it’s basically an attempt to aggrandize and justify ourselves by identifying ourselves with well-known people, as if to share in their reflected glory… It’s one manifestation of a regrettable attitude of self-celebration and self-congratulation that I think is too present in much of UU culture. I think it both inhibits our personal spiritual growth and makes us look shallow and self-absorbed to outsiders.” Ouch. And yes.  I wonder where might be better find an authentic source of self esteem?

Stefan is less harsh on us as a people, and chalks it up to the human craving to reassure ourselves that we are not such a peculiar religious minority after all.   We often undermine ourselves by getting caught up in esoteric history.  Again, Stefan:

“Historic Universalism is misrepresented when those who study our history superficially—even our ministers and scholars—then manufacture a revisionist story based largely on wild speculations emanating from reading the dictionary definition of Universalism with a few pithy anecdotes added for texture.  We are then too often left with a story that is divorced from history and mostly sentimental in nature, while missing the core teachings of our Universalist heritage: (1) that whatever else God may be or not be, God is love — and that even if we reject belief in God at all, we can still believe in the power of love; (2) that no individual or tradition possesses the whole truth, but that each grasps a piece of what is true, perhaps several such pieces; (3) that all people are somehow sacred, whether we call this an inner divinity or simply human dignity; (4) and that the same fate—whatever it may be—awaits us all.”
There are a number of celebrities articulating core universalist teachings (Pharrel Williams and Emma Watson), but I’m not adding them to our ranks until they claim us. And they probably won’t in the near future, if at all. However, I take this as a healthy indication there is a powerful universalism bubbling up in the greater culture – a reminder that out faith lives so much larger than self-identified-UUs or the walls of our institutions. The work of our tradition/ our people is to be in relevant, authentic relationship with the rising up of universalism.

Where do you see universalism rising up in your wider community? How could you/we be in a more dynamic relationship with universalism?

Rev. Tandi Rogers is starting a campaign to invite Pharrel Williams to be a future Ware Lecturer.  She doesn’t want to claim him so much as partner with him and continue to be inspired.  He makes her happy.