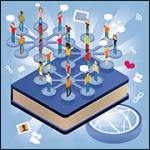 Social media is a new way of communicating that has turned the traditional broadcast communication paradigm on its head. Social media permits anyone to be broadcast to the public – something that in the past was a privilege limited to wealthy individuals and corporations.  Beginning with blogs and then moving to the more agile, fast-moving media such as Twitter, Facebook, Instagram, Pinterest, Google+ and more, social media has created all kinds of new opportunities to communicate with people all over the world – people we know and total strangers.

As Unitarians or Unitarian Universalists, we are people who love and benefit from a faith tradition that we know can be transformative and welcoming for so many people the world over. Most of those people have not even heard of us! Most of those who have heard of us lack any realistic sense of who we are or what our movement is about.

Social media presents a new opportunity to communicate with some of these people in the larger world. Many of us have tried to take advantage of this new media and we have done so with varying degrees of success.

Because of its easy, we are easily tempted to forget some of the basic rules of communication. Primary among those are three:

Who is your audience, what is your message, and how can you say it so they will pay attention?As I have watched various UU/Unitarian social media communicators, I have often seen messages that appear intended to reach existing members or friends of our congregations. They use insider language, talk about things that only we are likely to know about, and are put in the sort of language that UUs/Unitarians tend to use. If the intention of those messages is to reach non-UUs/Unitarians, those messages are poorly considered indeed. We can’t reach anyone if we don’t speak their language and address their interests and needs.There is nothing wrong with trying to communicate with other UUs/Unitarians. The intention may be to communicate about events, strengthen our shared purpose, build enthusiasm, enhance a feeling of community, etc. On Friday, I’ll talk about how my congregation and I have used social media to try to reach people who have no idea who we are!
_____________________