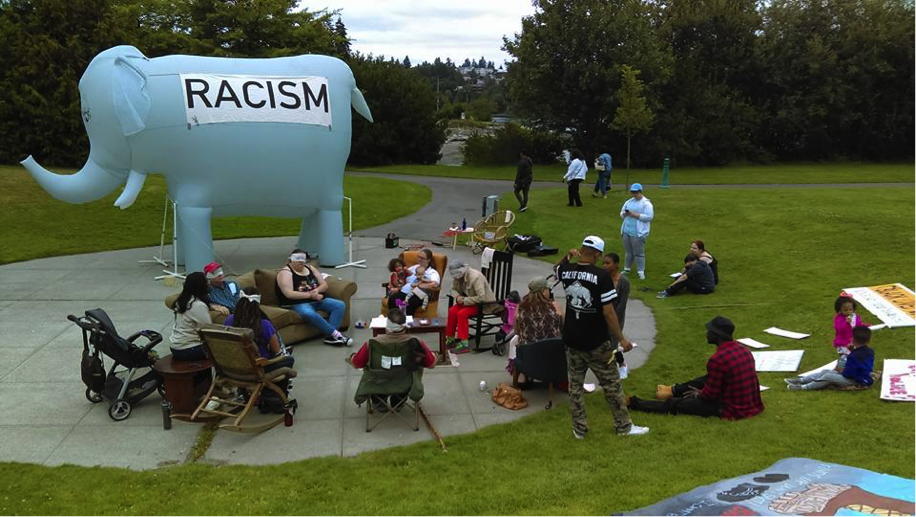 I am so proud to be part of a denomination that is focusing much of its social justice energy on the Movement for Black Lives. How proud? Proud enough to have hosted a Conversation about the Elephant in the Room with my own congregation along with our county’s Interfaith Network.

She’s big, she’s blue, emblazoned on the side of her body in bold letters is the word  RACISM, and she cannot be ignored. She’s heading out on a coast to coast tour, and she would love to come to your community. There are lots of ways to use her.

This is how we did it: At our local Gay Pride Festival this summer, we set up some comfortable furniture (and the giant pachyderm) and simply invited people to talk to each other. Some white people wore blindfolds that said “White Privilege”, a literal way to experience being blinded by white privilege while trying to understand racism. 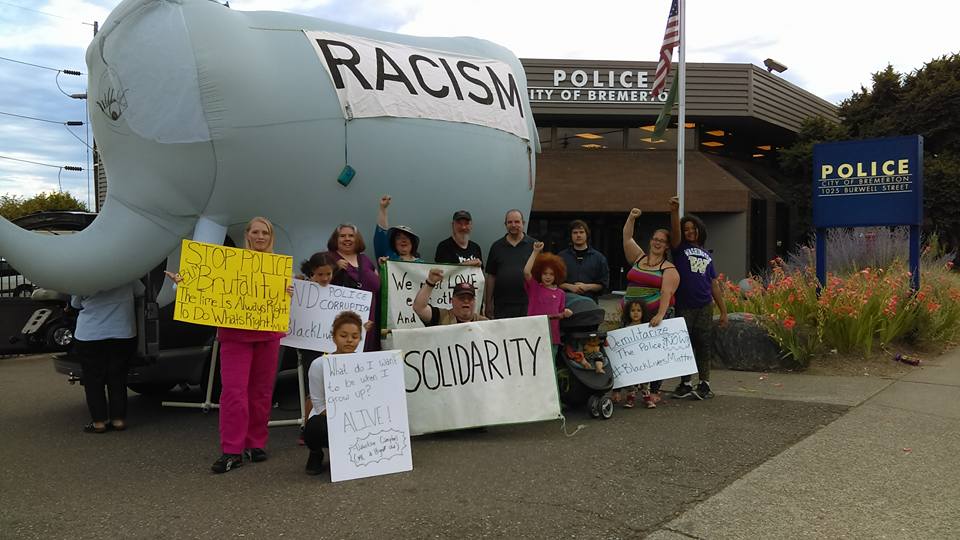 When the Movement for Black Lives called for a national day of action focussed on law enforcement on July 2, we answered the call by bringing the Elephant to our local police station, displaying signs to passing cars with messages in Solidarity. Many were uncomfortable with this action, maybe a bit too “edgy”. Ultimately it resulted in an ongoing positive dialogue that helped build relationship with our local police department.

That’s what’s happened locally, and my local action has been inspired by what’s happening denomination wide. At Portland’s 2015 General Assembly, the Movement for Black Lives was a focus through the whole week, ending in the dramatic final plenary session where we struggled to agree on the wording to the Action of Immediate Witness titled “Support the Black Lives Matter Movement”. I was privileged to participate in the die-in where more than 200 of us were in the street, closing a busy intersection for 4 ½ minutes representing the 4 ½ hours that Michael Brown’s body was left lying in the street in Ferguson. It has not been a part of my Unitarian experience to be involved in nonviolent direct action to such an extent. I know it has been part of our history, but I’ve only been a Unitarian for 15 years!

I couldn’t make it to the Columbus GA in 2016, but I followed it online. And there was Rev. Sekou and the Holy Ghost at the Closing Worship, leading thousands of Unitarians singing “Get Ready. We Comin’”, and yes yes yes, I felt the Spirit.

If you feel it too and would like to bring that Spirit into your community by hosting a Community Conversation about the Elephant in the Room sometime in the next twelve months, follow the link to sign up!

This is an Action-in-a-Box project of The Backbone Campaign in collaboration with SURJ, and soon, Unitarian friends across the country! The “box” will be shipped to you with everything you need to stage a successful Conversation on Racism event. Click here to express your interest, explore dates and get your questions answered http://www.backbonecampaign.org/organize_a_beyond_denial_installation. And feel free to contact Jo Walter with questions
The #BeyondDenial Racism is the Elephant in the Room Action-In-A-Box is a terrific tool to engage in transformative dialogue on racism and white privilege, how racism continues to seep into the structures of society and manifest in our communities, engage the larger public to make commitments to do racial justice work, and practice showing up as better allies in the movement for racial equity.

Jo Walter is a lay leader of the Kitsap Unitarian Universalist Congregation in Bremerton, WA